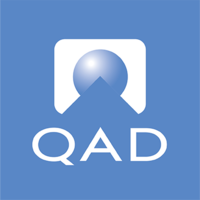 What are the highest paying jobs at QAD?

QAD Inc. is a software company that provides enterprise resource planning software and related enterprise software to manufacturing companies. The company has customers in over 100 countries around the world.

QAD was founded in 1979 by Pamela Lopker, who serves as president. QAD initially developed proprietary software applications for manufacturing companies in Southern California.

In 1984, QAD announced MFG/PRO, which was built using Progress Software Corporation's Fourth Generation Language and relational database. MFG/PRO was one of the first software applications built for manufacturers following the APICS principles. MFG/PRO was also one of the first applications to support closed-loop Manufacturing Resource Planning, as well as operation in open systems. QAD software supports lean manufacturing principles and interoperates with other systems via open standards. QAD stock began trading as of its initial public offering on August 6, 1997.

In 2003, a product called Supply Visualization was first hosted in a multi-tenant configuration for QAD customers and those customers' suppliers, establishing QAD as a player in providing Software-as-a-Service software for manufacturers. QAD Supplier Portal continues to allow customers and their authorized suppliers to share information about inventory, scheduling, purchase orders, shipments, Kanbans and more. In 2006, QAD announced a user interface called .NET UI, and in 2007 its core product suite name was changed from MFG/PRO to QAD Enterprise Applications. QAD began their cloud apps in 2003, and in 2011 officially launched QAD On Demand, which was later named QAD Cloud ERP.

QAD Job Search in US and Canada

Top Jobs at QAD by City

Everything you need to know about becoming a dermatologist
Ashley Jones
These US cities will pay up to $20,000 for you to relocate—but there’s always a catch
Benjamin Lorber
A guide to using social media to your advantage when job hunting
Sarah Dillon
Ladders / Company / QAD