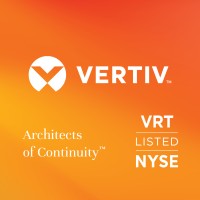 What are the highest paying jobs at Vertiv Holdings Co.?

Vertiv Holdings Co is an American, Ohio-based, provider of equipment and services for datacenters, with a portfolio of power, cooling and IT infrastructure solutions and services that extends from the cloud to the edge of the network.

Platinum Equity acquired the Emerson Network Power business from Emerson Electric in a transaction valued in excess of $4 billion, completed in December 2016. Emerson also retained a subordinated equity piece in the company.

Since 2016, Rob Johnson has been the chief executive officer of Vertiv.

Headquartered in Columbus, Ohio, Vertiv has ~20,000 employees and more than 25 manufacturing and assembly facilities around the world. The company has regional headquarters around the world in: Maidenhead, England, Bologna, Italy; Miami, Florida; Pasig, Manila, Philippines; Nanshan District, Shenzhen, China; and Mumbai, India.

Through a merger with GS Acquisition Holdings, the company became publicly traded on the New York Stock Exchange on February 10, 2020.

Vertiv Holdings Co. Job Search in US and Canada

Get paid to dream at work: This company will pay you to nap
Sara London
The average salary of a Chipotle general manager is $100K — and they’re hiring
Kyle Schnitzer
Amazon is now hiring 75K workers — and offering some $1K bonuses
Kyle Schnitzer
Ladders / Company / Vertiv Holdings Co.