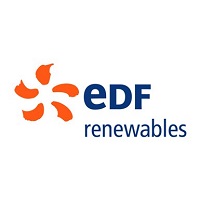 What are the highest paying jobs at EDF Renewable Energy?

EDF Renewables is a wholly owned subsidiary of the French utility EDF Group, specializing in renewable energy production. As an integrated operator, the Group develops and finances the construction of renewable energy facilities, and manages operations and maintenance for its own account and for third parties.

According to its own figures, the company is active in 22 countries with an installed global capacity of 12,468 MW, with wind being the largest sector, followed by solar and energy storage. The company is also involved in marine energy.

The company was formerly known as EDF Energies Nouvelles until it was rebranded in April 2018 to its current name, EDF Renewables.

EDF Renewable Energy Job Search in US and Canada