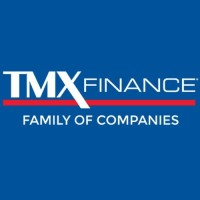 What are the highest paying jobs at TMX Finance Family of Companies?

TitleMax markets easy cash to borrowers with “good credit, bad credit, or no credit” secured by the title to their car. In Dallas, San Antonio, and Austin – which have all passed lending laws – those loans have come with zero percent interest.

After 30 days, however, the loan is due in full. If the borrower cannot pay –TitleMax’s average loan is for $1,300 – the borrower is sent to another TitleMax location outside of the city, where he or she can receive a new, unrestricted loan. The borrower would be free to renew the loan at that location indefinitely. That loan, states a contract given to one borrower, could have an annual rate as high as 310 percent.

TMX is owned by Tracy Young of Savannah, Georgia.

TMX Finance Family of Companies Job Search in US and Canada

Top Jobs at TMX Finance Family of Companies by City

What jobs can you get with a business degree?
Kattie Thorndyke
How to answer “What’s your desired salary?” (with 8 best responses)
Jessica Li
You have a “great” job offer… now what?
Kayla Duperreault
Ladders / Company / TMX Finance Family of Companies