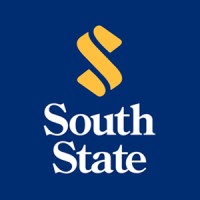 What are the highest paying jobs at South State Corporation?

In 2013, SCBT Financial Corp. announced a merger with First Financial Holdings of Charleston, started in 1934, which had 66 Carolinas locations and was the third-largest financial institution with headquarters in South Carolina. SCBT had 82 locations in 19 counties in South Carolina, 10 counties in north Georgia, two counties on the Georgia coast and in Mecklenburg County in North Carolina. SCBT president and CEO Robert R. Hill Jr. would remain as CEO, and chair Robert R. Horger would be chair. First Financial president and CEO R. Wayne Hall would become president of the merged company, and First Financial chair Paula Harper Bethea would be vice chair.

South State Corporation Job Search in US and Canada

Have you been the victim of 1 of these 7 cases of wrongful termination?
AnnaMarie Houlis
The job market is looking shockingly good for the Class of 2021
CW Headley
These are the 50 best companies in the world to work for right now
Kyle Schnitzer
Ladders / Company / South State Corporation