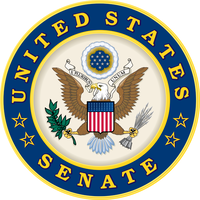 What are the highest paying jobs at United States Senate?

The composition and powers of the Senate are established by Article One of the United States Constitution. The Senate is composed of senators, each of whom represents a single state in its entirety. Each state is equally represented by two senators who serve staggered terms of six years. There are currently 100 senators representing the 50 states. The vice president of the United States serves as presiding officer and president of the Senate by virtue of that office, and has a vote only if the senators are equally divided. In the vice president's absence, the president pro tempore, who is traditionally the senior member of the party holding a majority of seats, presides over the Senate.

As the upper chamber of Congress, the Senate has several powers of advice and consent which are unique to it. These include the approval of treaties, and the confirmation of Cabinet secretaries, Supreme Court justices, federal judges, flag officers, regulatory officials, ambassadors, other federal executive officials and federal uniformed officers. If no candidate receives a majority of electors for vice president, the duty falls to the Senate to elect one of the top two recipients of electors for that office. The Senate conducts trials of those impeached by the House.
Total value of jobs:
$530,000
Total Jobs:
3
Average Pay:
$132,500
Total Experts:
1
% Masters:
41%

United States Senate Job Search in US and Canada

Have you been the victim of 1 of these 7 cases of wrongful termination?
AnnaMarie Houlis
The job market is looking shockingly good for the Class of 2021
CW Headley
These are the 50 best companies in the world to work for right now
Kyle Schnitzer
Ladders / Company / United States Senate