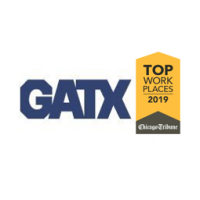 What are the highest paying jobs at GATX Corp?

GATX Corporation is an equipment finance company based in Chicago, Illinois. Founded in 1898, GATX's primary activities consist of railcar operating leasing in North America and Europe. In addition, GATX leases locomotives in North America, and also has significant investments in industrial equipment. The CEO/Chairman is Brian A. Kenney.

GATX derives its name from its primary reporting mark for its North American railcars, "GATX". The mark itself was derived from GATX's prior corporate name, General American Transportation Corporation. History includes GATX working with famous designer Russel Wright to develop "Meladur", a famous melamine dinnerware from 1943-1945, using Melmac by American Cyanamid which was to be used on passenger cars and in hospitals marked with the name "General American". Since all non-railroad owners of railcars must append an "X" to the end of their mark, GAT became GATX. GATX mainly applies the GATX mark to tank cars, although the mark has been used in other examples such as with hoppers; GATX's primary freightcar marks are GACX, GGPX, GIMX, GPLX, GMTX and LLPX, and GPFX. GATX also owns a number of other marks, including GABX, GAEX, GFSX, GOHX, GSCX, IPSX, and TRIX. Many GATX cars carry a large "GATX" logo in the upper right-hand corner of the car regardless of the reporting mark they carry; this logo is applied for marketing reasons and does not have any operational significance.

GATX Corp Job Search in US and Canada