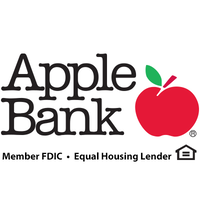 What are the highest paying jobs at Apple Bank for Savings?

Apple Bank for Savings is a bank holding company headquartered in Manhasset, New York and operating in the New York metropolitan area.

The company was founded in 1863 as the Haarlem Savings Bank by a group of local merchants as a community-based mutual savings bank. Harlem at the time was a suburban village - it was not part of New York City until 1873 - and the bank's first location on 3rd Avenue between 125th and 126th Streets was surrounded by farms and undeveloped lots. In 1869, the bank moved to a building of its own construction on 3rd Avenue and 124th Street.

In 1932, just after the Great Depression, the bank acquired Commonwealth Savings Bank and its 2 branches. The branches were on 157th Street and 180th Street in Washington Heights, Manhattan. In 1933, the bank dropped the second 'a' from its name to match the now-standard spelling of the neighborhood's name: Harlem.

In 1966, the bank opened a branch in Manhasset, New York, on Long Island as the population growth shifted to the suburbs. In 1968, the bank moved its headquarters from Harlem to 42nd Street.

Apple Bank for Savings Job Search in US and Canada

Top Jobs at Apple Bank for Savings by City

Is this the worst job interview question? The internet seems to think so.
CW Headley
These are the 15 highest-paying psychology jobs
Hailey Hudson
6 jobs that prepare you for side hustle success
Kyle Young
Ladders / Company / Apple Bank for Savings