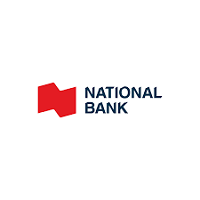 What are the highest paying jobs at National Bank of Canada?

The National Bank of Canada is the sixth largest commercial bank in Canada. It is headquartered in Montreal, and has branches in most Canadian provinces and 2.4 million personal clients. National Bank is the largest bank in Quebec, and the second largest financial institution in the province, after Desjardins credit union. National Bank's Institution Number is 006 and its SWIFT code is BNDCCAMMINT.

As of October 31, 2019, National Bank had a network of 422 branches and 939 automated teller machines in Canada. It also had a representative offices, subsidiaries and partnerships in other countries, through which it serves Canadian and non-Canadian clients. It owns ABA Bank in Cambodia.

In 2011, National Bank was placed third in Bloomberg's list of "The World’s Strongest Banks". in 2018, it placed 41st on Go back Finance's list of the 50 strongest banks.

In 1859, francophone businessmen in Ontario and Quebec were keen to establish a bank under their local control, and persuade the provincial legislature to pass the act that created the Banque Nationale on May 4, 1859. Some members of the anglophone bourgeoisie participated in the bank's share capital, but francophones retained exclusive control and held all seats on the board of directors with Ulric-Joseph Tessier, lawyer and Member of the Legislative Assembly serving as chairman of the bank.
Total value of jobs:
$835,000
Average Pay:
$119,285
Total Experts:
2
% Masters:
50%

Have you been the victim of 1 of these 7 cases of wrongful termination?
AnnaMarie Houlis
The job market is looking shockingly good for the Class of 2021
CW Headley
These are the 50 best companies in the world to work for right now
Kyle Schnitzer
Ladders / Company / National Bank of Canada