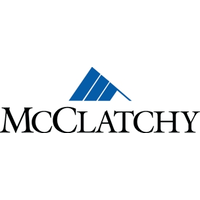 What are the highest paying jobs at McClatchy Shared Services?

The McClatchy Company, commonly referred to as simply McClatchy, is an American publishing company incorporated under Delaware's General Corporation Law and based in Sacramento, California. It operates 29 daily newspapers in fourteen states and has an average weekday circulation of 1.6 million and Sunday circulation of 2.4 million. In 2006, it purchased Knight Ridder, which at the time was the second-largest newspaper company in the United States. In addition to its daily newspapers, McClatchy also operates several websites and community papers, as well as a news agency, McClatchyDC, focused on political news from Washington, D.C.

McClatchy Shared Services Job Search in US and Canada