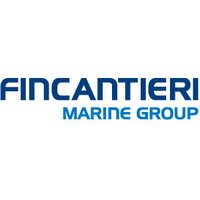 What are the highest paying jobs at Fincantieri Marine Group?

Fincantieri S.p.A. is an Italian shipbuilding company based in Trieste, Italy. Already the largest shipbuilder in Europe, after the acquisition of Vard in 2013, Fincantieri group doubled in size to become the fourth largest in the world. The company builds both commercial and military vessels.

The company is listed on the Borsa Italiana and is a component of FTSE Italia Mid Cap Index.

Fincantieri Marine Group Job Search in US and Canada