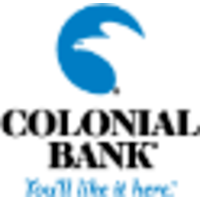 What are the highest paying jobs at Colonial Bank?

Colonial Bank, formerly a subsidiary of Colonial BancGroup, was headquartered in Montgomery, Alabama. Colonial Bank had 346 branches in the states of Alabama, Georgia, Florida, Nevada and Texas.

Colonial's assets had grown from $166 million in 1981 to $26 billion. Colonial expanded from its base of Alabama to fast growing regional markets such as Florida, Georgia, Texas, and Nevada. Colonial Bank was the fifth-largest commercial bank in Florida and 27th-largest commercial bank in the USA. Colonial Bank was frequently the target of rumors that it would be acquired by a larger bank.
Total value of jobs:
$3,650,000
Average Pay:
$98,648
Total Experts:
1
% Masters:
24%