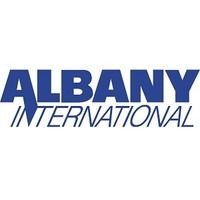 What are the highest paying jobs at Albany International Corporation?

Albany International Corporation, originally the Albany Felt Company, is an industrial-goods company based in Rochester, New Hampshire, United States. It makes two different lines of products: machine clothing, in particular felts for use in paper manufacturing and textile processing; and composites used in the aerospace industry. Its shares trade on the New York Stock Exchange under the ticker symbol AIN. It is included in both the S&P 600 and the Russell 2000 stock indices.

The company was founded in Albany, New York, in 1895 to make felts, serving the many paper mills in the region. It grew and prospered throughout the early 20th century, even during the Great Depression. In the later half of the 20th century it began acquiring overseas firms and expanding into the composites sector. In 2013 it moved its headquarters to New Hampshire to better serve its aerospace customers.

...with Albany International Corporation and 1000s of other companies paying $100K+

Albany International Corporation Job Search in US and Canada