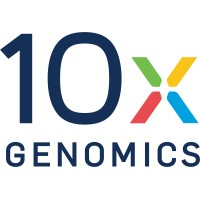 What are the highest paying jobs at 10X Genomics?

10x Genomics is an American biotechnology company that designs and manufactures gene sequencing technology used in scientific research. It was founded in 2012 by Serge Saxonov, Ben Hindson, and Kevin Ness.

10x Genomics was founded in 2012 by Serge Saxonov, Ben Hindson and Kevin Ness to create advanced testing equipment for use in cellular biology. Prior to starting the company, Saxonov was the founding architect, and director of research and development at 23andMe. Ness left 10x Genomics in December 2016 and in 2018, Justin McAnear, Tesla's former finance chief joined the company as CFO.

Saxonov, Hindson, and Ness worked together at Quantalife prior to its acquisition by Bio-Rad in 2011 and left in 2012 to launch 10x Genomics. In 2014 an arbitration dispute was brought against the three cofounders by Bio-Rad, claiming they had breached obligations they allegedly owed to Bio-Rad after it acquired Quantalife. In 2015 an arbitrator determined that the founders of 10x Genomics had not breached their obligation to Bio-Rad when they left the company and denied its claims.

10X Genomics Job Search in US and Canada