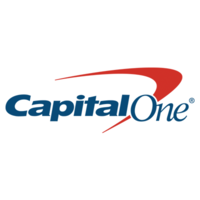 About Capital One Financial Corporation

Capital One Financial Corporation is an American bank holding company specializing in credit cards, auto loans, banking, and savings accounts, headquartered in McLean, Virginia with operations primarily in the United States. It is on the list of largest banks in the United States and has developed a reputation for being a technology-focused bank.

The bank has 755 branches including 30 café style locations and 2,000 ATMs. It is ranked 97th on the Fortune 500, 17th on Fortune's 100 Best Companies to Work For list, and conducts business in the United States, Canada, and the United Kingdom. The company helped pioneer the mass marketing of credit cards in the 1990s. In 2016, it was the 5th largest credit card issuer by purchase volume, after American Express, JPMorgan Chase, Bank of America, and Citigroup.

With a market share of 5%, Capital One is also the second largest auto finance company in the United States, following Ally Financial.

The company's three divisions are credit cards, consumer banking and commercial banking. In the fourth quarter of 2018, 75% of the company's revenues were from credit cards, 14% were from consumer banking, and 11% were from commercial banking. Capital One has consistently ranked as one of the best places to work for, appearing in multiple Glassdoor's Best Places To Work reports. In 2020, Fortune magazine ranked Capital One at number 24 on their Fortune List of the Top 100 Companies to Work For in 2020 based on an employee survey of satisfaction. The next year in 2021, Capital One rose to rank ninth place on the 2021 list.

Everything you need to know about becoming a pathologist
Ashley Jones
Get paid to dream at work: This company will pay you to nap
Sara London
The average salary of a Chipotle general manager is $100K — and they’re hiring
Kyle Schnitzer