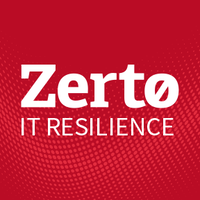 What are the highest paying jobs at Zerto?

Zerto Ltd., through its main product the Zerto IT Resilience Platform, provides disaster recovery, backup and workload mobility software for virtualized infrastructures and cloud environments. Zerto is co-headquartered in Boston and Israel and is a subsidiary of Hewlett Packard Enterprise company.

Ziv Kedem, Zerto's founder and CEO, previously co-founded Kashya. Zerto has received investments from venture capital firms such as 83North, Battery Ventures, Harmony Partners, RTP Ventures, IVP, and USVP. In 2016, the company was ranked #45 on the Deloitte Fast 500 North America list. Zerto IT Resilience Platform 6.0 is a Silver Winner in the Backup and Disaster Recovery Software Category in Storage Magazine and SearchStorage’s 2018 Product of the Year.

Zerto provides disaster recovery software for virtualized and cloud infrastructures. The company's original product, Zerto Virtual Replication, was released in August 2011. The technology leverages 'hypervisor-based replication', which moves data replication up the server stack from the storage layer into the hypervisor. Zerto is entirely hypervisor and storage-agnostic, so data can be replicated to and from any VM operating to a different platform.

Zerto Job Search in US and Canada

Top Jobs at Zerto by City

These are the 15 highest-paying psychology jobs
Hailey Hudson
6 jobs that prepare you for side hustle success
Kyle Young
This is what work will look like in 2030, and it isn’t pretty
Kyle Schnitzer
Ladders / Company / Zerto