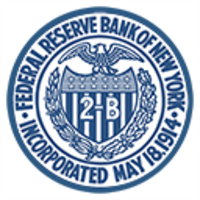 What are the highest paying jobs at Federal Reserve Bank of New York?