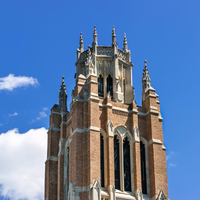 What are the highest paying jobs at Marquette University?

The university was named after 17th-century missionary and explorer Father Jacques Marquette, SJ, with the intention to provide an affordable Catholic education to the area's emerging German immigrant population. Initially an all-male institution, Marquette became the first coeducational Catholic university in the world in 1909 when it began admitting its first female students.

Marquette is organized into 11 schools and colleges at its main Milwaukee campus, offering programs in the liberal arts, business, communication, education, engineering, law and various health sciences disciplines. The university also administers classes in suburbs around the Milwaukee area and in Washington, DC. While most students are pursuing undergraduate degrees, the university has over 68 doctoral and master's degree programs, a law school, a dental school, and 22 graduate certificate programs. The university's varsity athletic teams, known as the Golden Eagles, are members of the Big East Conference and compete in the NCAA's Division I in all sports.

Marquette University Job Search in US and Canada

America falls way short, adds fewer jobs than expected in April
Kyle Schnitzer
Everything you need to know about becoming a dermatologist
Ashley Jones
These US cities will pay up to $20,000 for you to relocate—but there’s always a catch
Benjamin Lorber
Ladders / Company / Marquette University