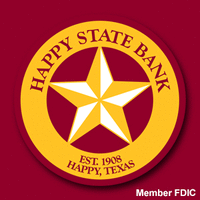 What are the highest paying jobs at Happy State Bank?

Happy State Bank Stadium, formerly known as Kimbrough Memorial Stadium, is a stadium in Canyon, Texas. It is owned by Canyon Independent School District and is primarily used for American football. It is the home stadium for Canyon High School and Randall High School of Canyon Independent School District, and is the former home of West Texas A&M University. The stadium holds 20,000 people and was built in 1959. It was originally called Buffalo Bowl on Canyon Hill but was renamed Kimbrough Memorial Stadium in 1971 in honor of the late West Texas State University football coach and athletic director Frank Kimbrough. Starting in the 2020 season, the stadium is going to be renamed Happy State Bank Stadium, but Frank Kimbrough will still have a place at the old West Texas A&M home stadium: "Canyon ISD plans to honor the late former West Texas A&M athletic director and head football coach Frank Kimbrough, whose name stood on the stadium since 1971 with a memorial grove area at the front entrance of the new facility on the south end of the stadium."

Is this the worst job interview question? The internet seems to think so.
CW Headley
These are the 15 highest-paying psychology jobs
Hailey Hudson
6 jobs that prepare you for side hustle success
Kyle Young
Ladders / Company / Happy State Bank