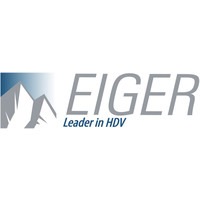 What are the highest paying jobs at Eiger BioPharmaceuticals, Inc.?

The Eiger is a 3,967-metre mountain of the Bernese Alps, overlooking Grindelwald and Lauterbrunnen in the Bernese Oberland of Switzerland, just north of the main watershed and border with Valais. It is the easternmost peak of a ridge crest that extends across the Mönch to the Jungfrau at 4,158 m, constituting one of the most emblematic sights of the Swiss Alps. While the northern side of the mountain rises more than 3,000 m above the two valleys of Grindelwald and Lauterbrunnen, the southern side faces the large glaciers of the Jungfrau-Aletsch area, the most glaciated region in the Alps. The most notable feature of the Eiger is its nearly 1,800-metre-high north face of rock and ice, named Eiger-Nordwand, Eigerwand or just Nordwand, which is the biggest north face in the Alps. This huge face towers over the resort of Kleine Scheidegg at its base, on the homonymous pass connecting the two valleys.

The first ascent of the Eiger was made by Swiss guides Christian Almer and Peter Bohren and Irishman Charles Barrington, who climbed the west flank on August 11, 1858. The north face, the "last problem" of the Alps, considered amongst the most challenging and dangerous ascents, was first climbed in 1938 by an Austrian-German expedition. The Eiger has been highly publicized for the many tragedies involving climbing expeditions. Since 1935, at least sixty-four climbers have died attempting the north face, earning it the German nickname Mordwand, literally "murder wall"—a pun on its correct title of Nordwand.

...with Eiger BioPharmaceuticals, Inc. and 1000s of other companies paying $100K+

Eiger BioPharmaceuticals, Inc. Job Search in US and Canada

These are the industries that hire the most Harvard Business School grads
Meredith Schneider
These are the 5 college majors that will make you a top earner for life
CW Headley
These people will get hired in 2021
Kyle Schnitzer
Ladders / Company / Eiger BioPharmaceuticals, Inc.