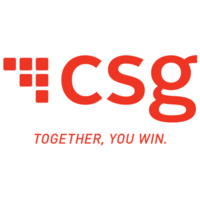 What are the highest paying jobs at CSG International?

CSG is a multinational corporation headquartered in Greenwood Village, Colorado. It provides business support systems software and services, primarily to the telecommunications industry.

CSG was founded by Neal Hansen as a division of First Data in 1982. It became an independent corporation when it was acquired by CSG Holdings in 1994 for $137 million. A contract with Tele-Communications Inc., the largest cable TV business at the time, was influential in the company's growth from $80 million in revenue in 1994 to $171 million by 1997. CSG went public in 1996. A dispute with TCI over pricing led to a $120 million arbitration settlement in 2002 with Comcast, who acquired the TCI business. The two continued to do business together and expanded their relationship in 2014. CSG made more than ten acquisitions in the 2000s, mostly of companies that sold billing, customer service, and operations software.

CSG International Job Search in US and Canada