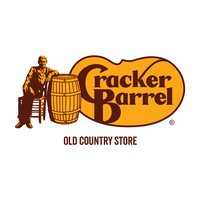 What are the highest paying jobs at Cracker Barrel Old Country Store, Inc?

Cracker Barrel Old Country Store, Inc. is an American chain of restaurant and gift stores with a Southern country theme. The company was founded by Dan Evins in 1969; its first store was in Lebanon, Tennessee. The corporate offices are located at a different facility in the same city. The chain's stores were at first positioned near Interstate Highway exits in the Southeastern and Midwestern United States, but expanded across the country during the 1990s and 2000s. As of September 1, 2019, the chain operates 660 stores in 45 states.

Cracker Barrel's menu is based on traditional Southern cuisine, with appearance and decor designed to resemble an old-fashioned general store. Each location features a front porch lined with wooden rocking chairs, a stone fireplace, and decorative artifacts from the local area. Cracker Barrel partners with country music performers. It engages in charitable activities, such as its assistance to victims of Hurricane Katrina and injured war veterans.

During the early 1990s, the company became the subject of controversy when founder and CEO Dan Evins instituted an official company policy prohibiting the hiring of any individual whose "sexual preferences fail to demonstrate normal heterosexual values." Following massive public backlash and large shareholders such as the New York City Employee Retirement System threatening to vote out the entirety of upper management, the company reversed the policy. For the next decade, Cracker Barrel continued to spark controversy through Evin's public and private encouragement of discriminatory practices against female and minority employees, practices which violated the company's own non-discrimination policy. In July 2001, shareholders stripped Evins of his position as President and CEO of the company, replacing him with Michael A. Woodhouse, who at the time was serving as the company's Chief Operating Officer. Evins was allowed to maintain his position as Chairman of the Board. The same year, shareholders forced the Company's board to vote unanimously to add sexual orientation to Cracker Barrel's non-discrimination policy, with the term officially being added the following year.

This is what recruiters do and do not want to see on your social media
Kyle Schnitzer
These are the industries that hire the most Harvard Business School grads
Meredith Schneider
These are the 5 college majors that will make you a top earner for life
CW Headley
Ladders / Company / Cracker Barrel Old Country Store, Inc